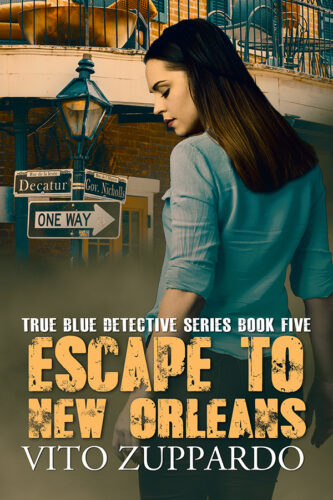 Mario DeLuca has been drugged, unable to respond. Is it really happening or just another of his recurring nightmares, where an unknown man is chasing him?

Chief of Detectives Gretchen Parks sends Mario to Las Vegas to a convention. However, Chief Parks is concerned about her sister. The latter is visiting Las Vegas and thinks she’s seen her daughter, Sophia, kidnapped and missing for six years. The chief asked Mario to explore the situation just to appease her sister.

Mario tracks the clues down, and this time the mother may be onto something—the girl spotted could be her daughter. Hatching a plan to get her back from what Mario unravels as Salvadoran sex traffickers.
Eventually, they escape the kidnappers and fly to New Orleans, and Sophia is placed in protective custody. Trying to stay one step ahead of the Salvadorans, who want the girl back, and unravel the mystery of how Sophia ended up with them creates international intrigue.

Set in the history-filled city of New Orleans, readers will feel part of the city as they travel the streets and waterways in this action-packed, intriguing, and heartfelt book.