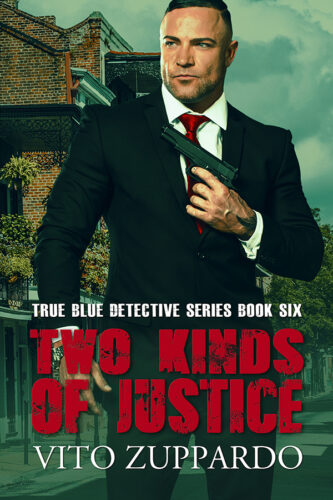 Another True Blue officer is involved in a shooting. Detective Mario DeLuca has a personal interest in the officer. The trauma of his police work and his personal life are inseparable. His recurring nightmares continue—a man is chasing him, and there’s seemingly no resolution.

Mario and his closest friend Howard, trained by a foreign army to kill like an assassin, are targeted by the mob. Several people want them killed for disrupting their businesses and revenge for doing the police work they’re trained to do. With help from Julie Wong, they fight back.

This story considers casinos and the high rollers who frequent them and gives an inside look at the gambling side of New Orleans. The detectives attempt to discover why big winners are being robbed and killed and how two kinds of justice might be fair to bring an end to the scam.

But work isn’t the only thing keeping Mario and Howard busy, as they both try to enjoy a little downtime with friends, especially female friends. Could there be new loves for both men? While they both have a lot of personal baggage to sort through, it could be promising for them.

Set in the history-filled city of New Orleans, readers will feel part of the city as they travel the streets in this action-packed, intriguing, and heartfelt book.